It was time to move on from Perth and drive 13kms to the historic town of Guildford in the Swan Valley. 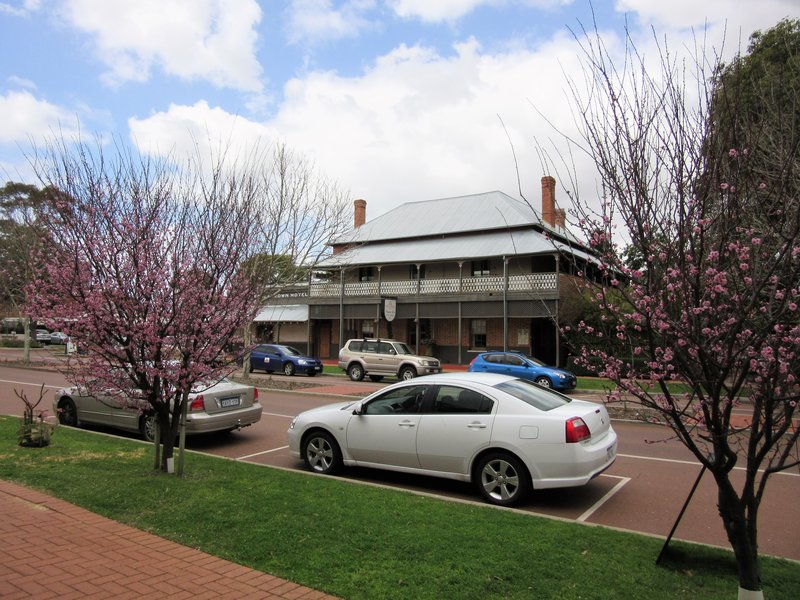 Guildford is only one of three towns established during the founding of the Swan River Colony in 1829 when Western Australia was settled.
It was planned to be like an English country town. In 1851 it became a convict ticket-of-leave hiring depot, then in 1857, steamboats travelled the Swan River to the port of Guildford, this resulted in Guildford becoming a thriving market town. The railway arrived in the 1880s resulting in a decline in river transport.

Guildford was declared a Historic Town in 1984. 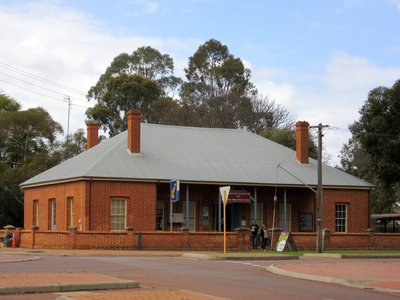 My first stop was at the Swan Valley visitor centre where I picked up the free Heritage walking trail maps. If you want to remember all the heritage information you saw on the tour, then you can buy a book which covers the four trails, cost of $20, bought from the centre

The Visitor centre is located in the old Courthouse, built in 1867, adjoining it is the Guildford Historical society museum.

My first stop of the day was at the Guildford Historical Museum that's located next to the Info centre. I walked in, paid my money, then was given a tour of the Museum by one of the volunteers. I thought the Museum collection was quite good as I found some new historical items not found in other museums. I had never seen a multiple iron heating stove used by Tailors, professional laundries and large house-holds. The servants used these in the 1880's. There was much more to see from life in the colonial days of Australia around Guildford. Outdoor implements and quite a good collection of saddles, stirrups and spurs. 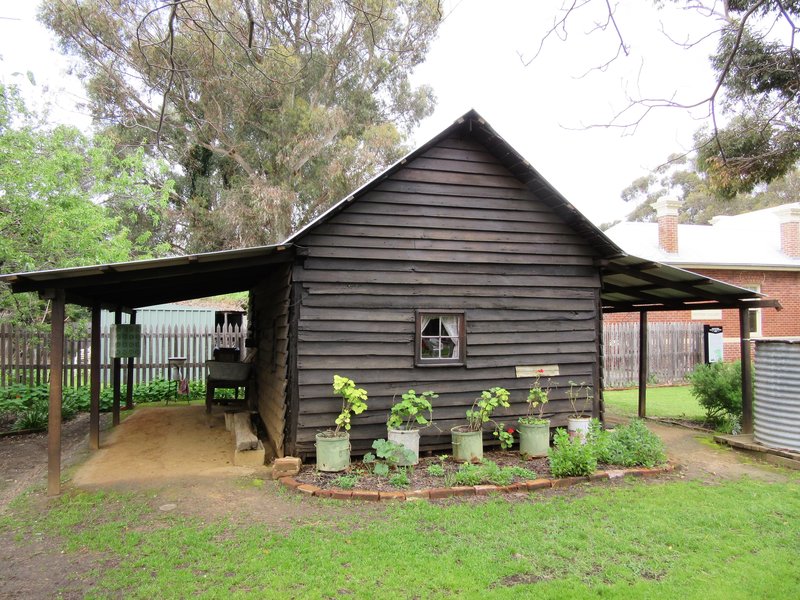 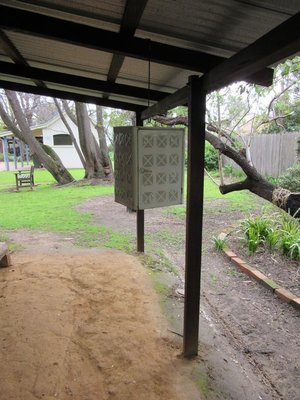 Hanging under the verandah was the modern day refrigerator, (meat safe) 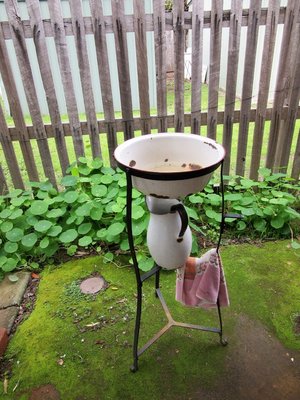 Outside was the bathroom (bowl and Jug) 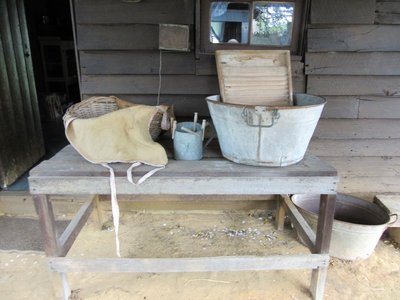 The washing machine (tub and scrubbing board) 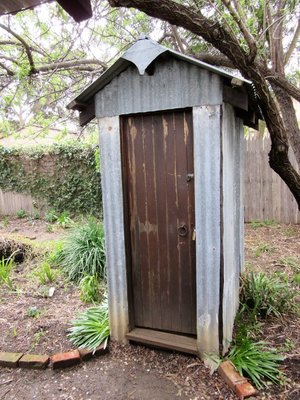 Also in the museum is the old Gaol, constructed in four stages in 1841 using convict labour. The small building consisted of two cells, a constable’s room and stocks. In those days it was both the gaol and the courthouse, I guess that cut out the "middleman" - just a short walk and you were put into your cell!
It was a local government resident that requested a gaol be built, the reason - three Hotels caused too much trouble in the town, so a lock-up was needed! 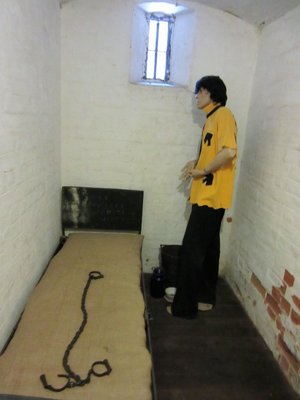 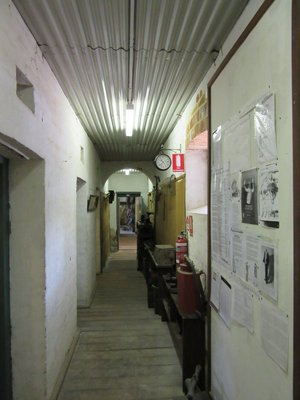 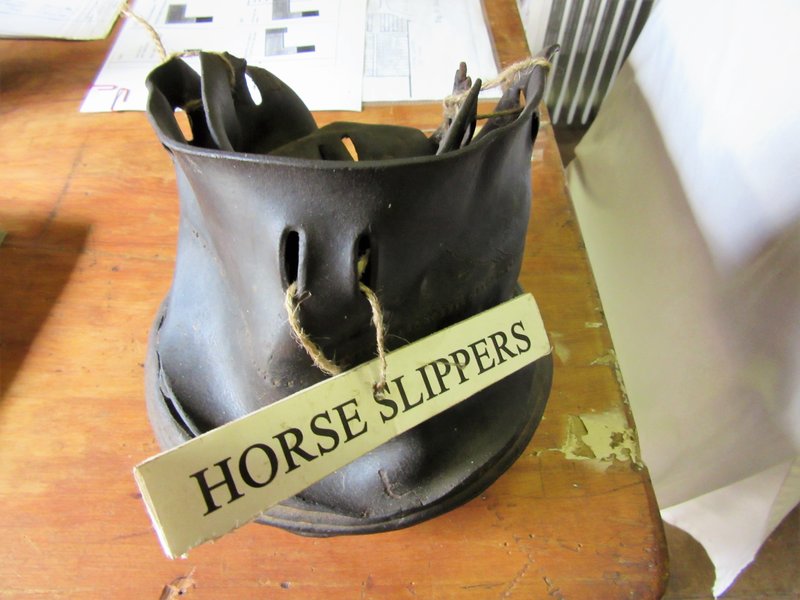 At the Guildford Museum

Guildford had many historic homes and other buildings, each with an Information board with photos. 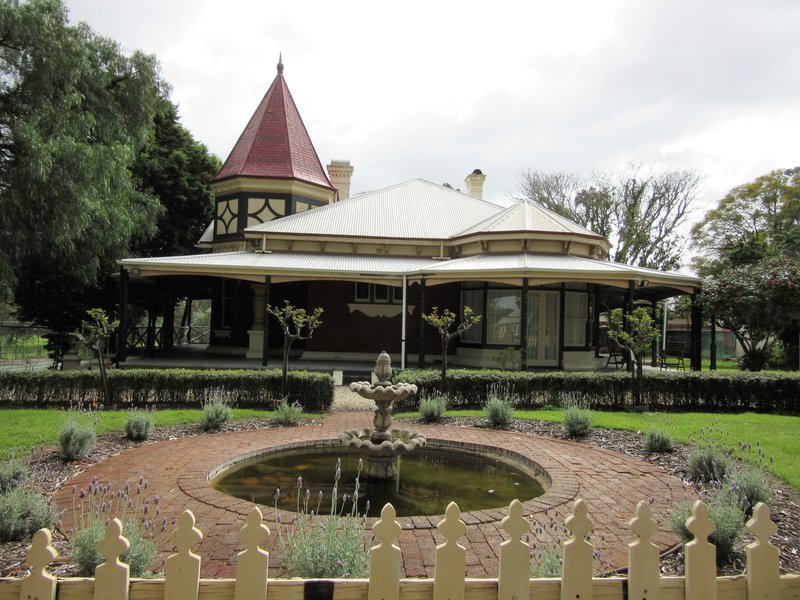 On my walking tour along Swan Street, I came across the beautiful home 'Crossland's House' which belonged to the wealthy Charles Morton Crossland, a surveyor and land agent in Perth. The home was built in 1896 when the gold rush was on and plenty of money was around. This large brick house was built in Art Nouveau style, complete with cellar and servants quarters and with a turret. Guildford was the fashionable place to live at the time.
The home is surrounded by lawn and garden and has a picket fence along the boundary. 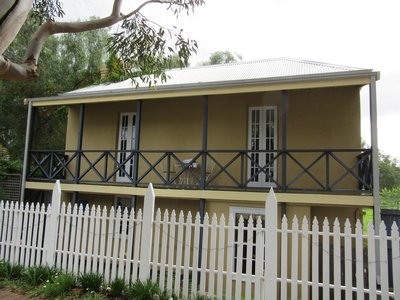 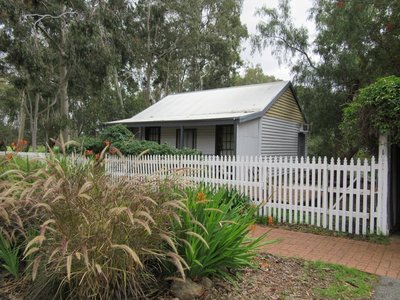 Further along Swan Street are some cottages and old buildings that have been restored and painted, they look really good! One is known as "the two storey house." It was built in colonial Georgian style around 1870 and is one of the last houses of this type remaining in Guildford. 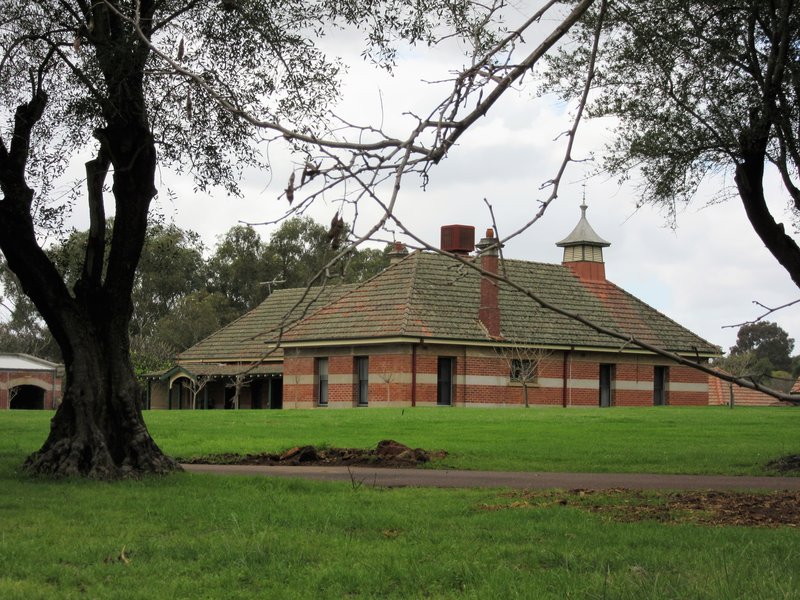 Leaving Swan street behind, I followed the 'River Ramble' trail that took me towards the Swan River and past 'Garden Hill,' which in 1941 was purchased by the Catholic Archbishop of Perth for use as a seminary.
Already on Garden Hill, was the large bungalow style house with 13 large rooms including a detached servants wing with a combined ballroom and billiard room, stables which are now used as a garage, a boathouse on the river, tennis courts, playing areas, orchard and vineyard. Since 1942 more than 400 men have passed through St. Charles seminary. Over 160 became ordained priests and 5 Archbishops or Bishops.

The oldest Hotel in Western Australia and 3rd oldest licensed Hotel in Australia, is the Rose & Crown at Guildford 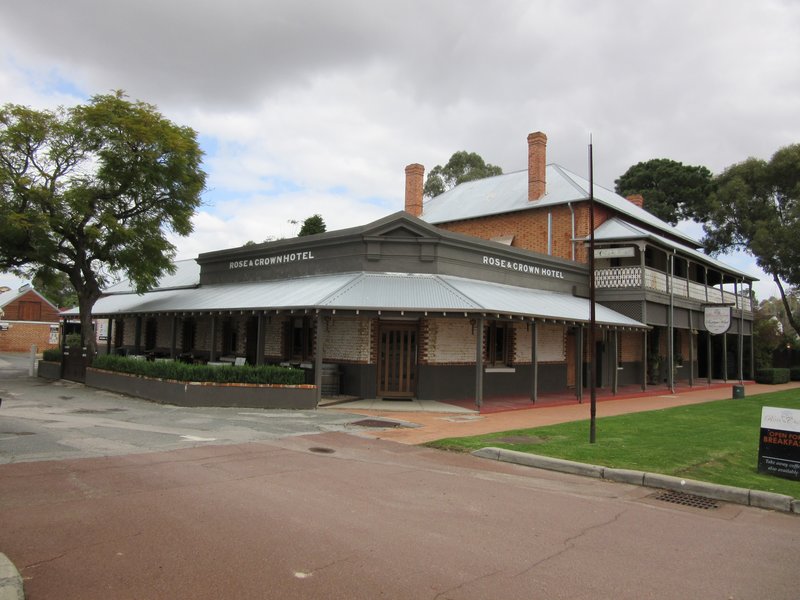 The Hotel dates to 1841, when it was built in Georgian style as a licensed Inn.
In the early days, there was a tunnel from the main cellar to the nearby Swan River. This is quite a distance to dig a tunnel and I wondered why. Was there a worry of being robbed whilst moving goods to the Hotel - was that the reason for the tunnel? By using a tunnel, the stores could be safely moved from River barges into the building. 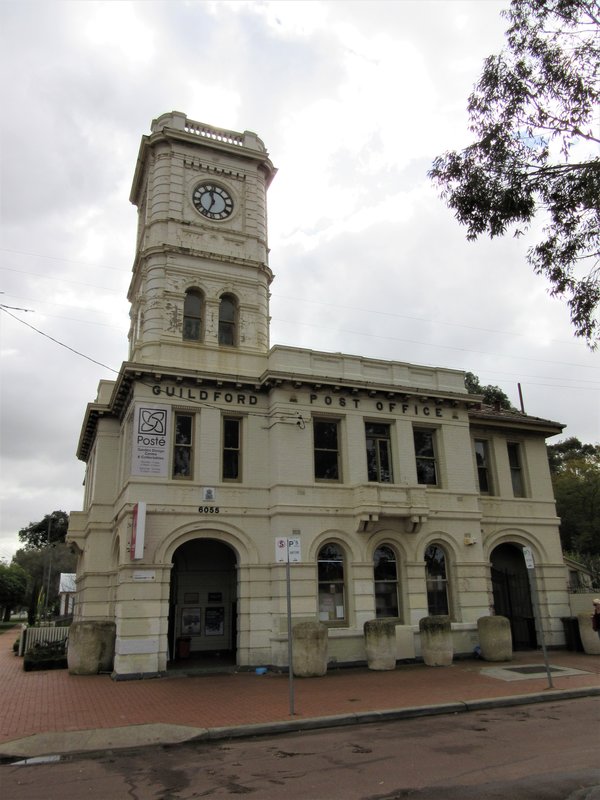 The old Guildford Post Office is a very nicely painted Victorian Italianate building that was built in 1897, not only for the mail, but for the Post-master and his family to live. It's one of the most prominent landmarks in town. 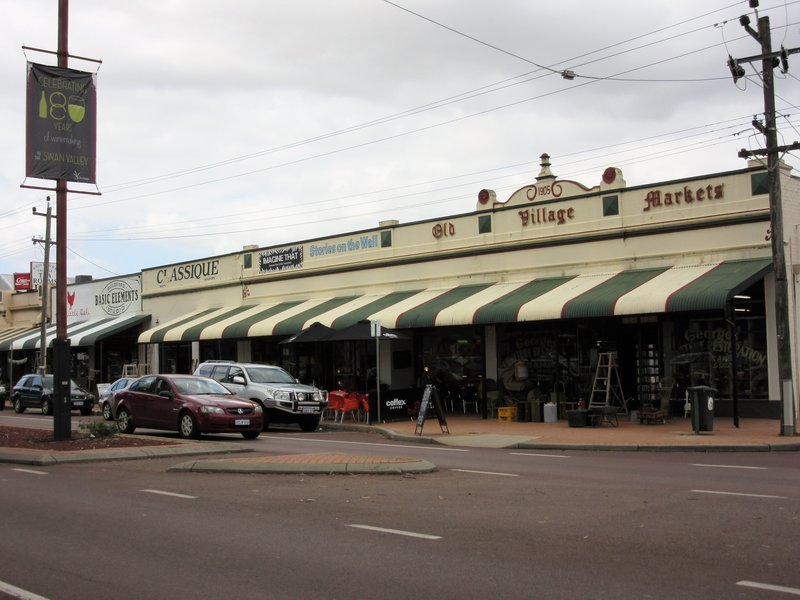 I had done a lot of walking and was surprised to find it was lunch time already. The main street still hadn't been explored, so I walked to the furthest end and made my way back, stopping at a Café to buy some lunch which I then took across the railway line and into Stirling Park where my husband was waiting.

Stirling Park is quite large. It not only is parkland, but also where War Memorials are and St. Matthew's church. 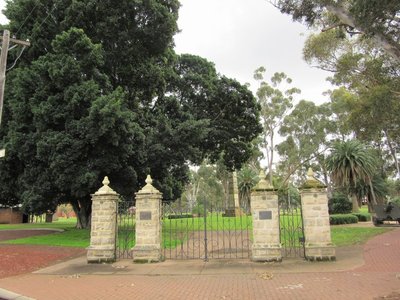 The Memorial gates were made and dedicated to the memory of gunners and cavalrymen who trained at Guildford Camp during WW I.
In 1921, Guildford received a war trophy - A howitzer gun captured at Hamel, France, unfortunately that one was melted down for the war effort in 1944. In 1960, two 25 pounder Howitzers took the place of the old. 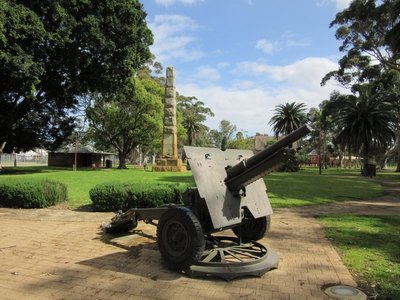 Every year since 1929, "Gunners Day" has remembered these Soldiers. On the day, there is a parade which marches to St Matthew`s Church where a memorial service is conducted. Inside St. Mathew's Church is a "Battery Banner," a silk ensign the gunners took with them in 1915. The flag was flown where the Aussies were stationed in Egypt, Gallipoli and France, before returning to St. Matthew's Church, Guildford for safe keeping.
The Church I saw, was not the first, nor the second St Matthew’s Church from 1860, but the third from 1873. 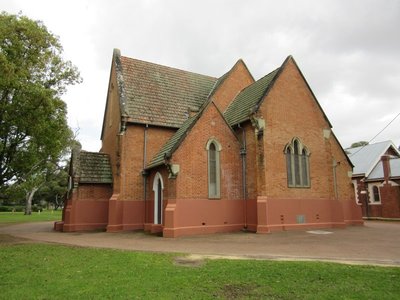 Beside St. Matthews was the Church Hall and the Remembrance garden, planted with roses in specially chosen colours. "White Roses for purity, pink for remembrance, yellow for the physical absence of loved ones, peach for reflection, and red for love and the essence of the Holy Spirit."

Guildford was an interesting historic town!

It was back in the car for a drive through the Swan Valley and to Whiteman Conservation Park that had tourist and historic attractions. We found a re-created Village with shops that sold crafts, pottery, lollies, art and more, only as it was a week day most of them were shut. 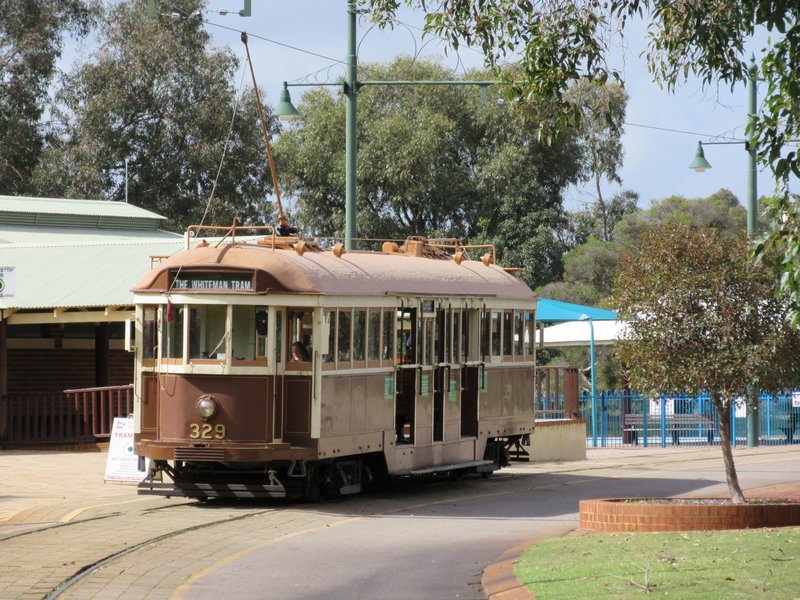 The old vintage Tram was running, this provides a service from Mussel Pool and back to village every half hour. 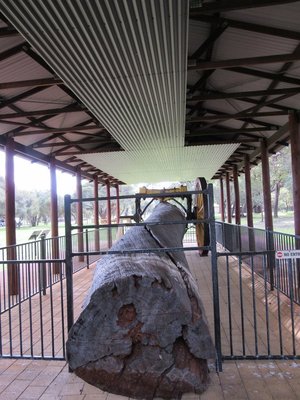 A Whim is a cart designed to move logs and is pulled by bullocks or horses. 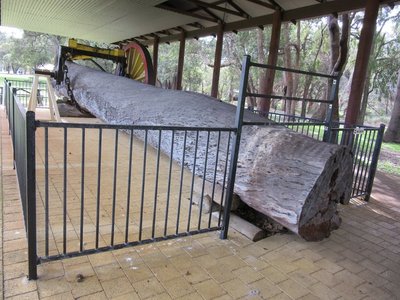 I thought the picnic areas were lovely and could imagine this place being very full on the weekends.

Well, we didn't come here for picnic, just for a look, so we drove back onto Route 50 for the drive to Toodyay where we would stop for the night. 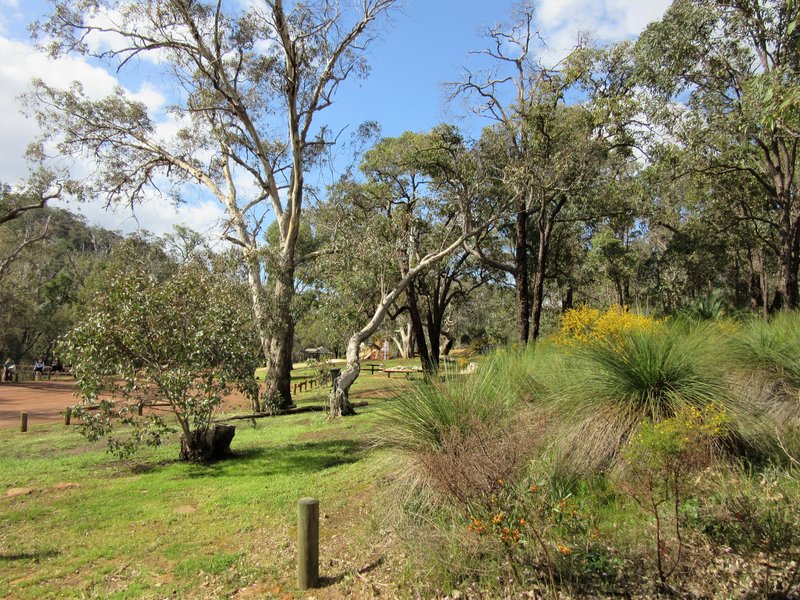 On our way to Toodyay we saw the notice to Noble falls. These happened to be very close to the road and located on pretty Wooroloo Brook which ran alongside the car park. Just a little further along were the falls themselves, not high ones but very attractive as the water flows over a series of ledges. 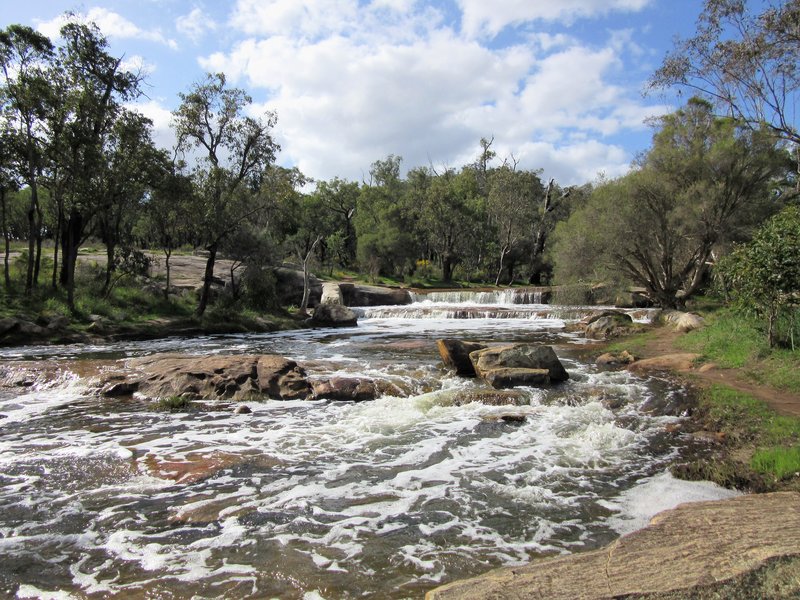 The falls are located 4kms past Gidgegannup, when coming from Perth/ Guildford direction. 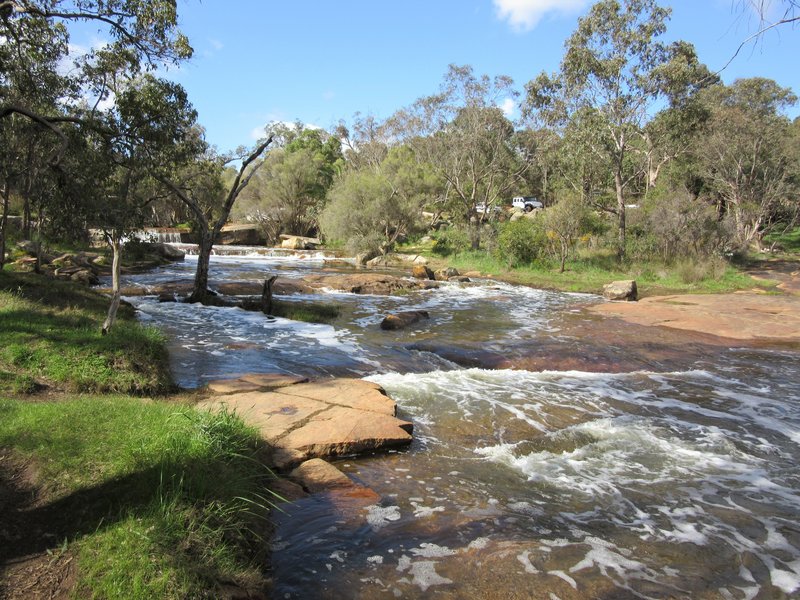 We had nearly reached Toodyay when we saw the sign to Toodyay Holiday Park and Chalets. As we hadn't booked accommodation, it was decided to go for a look. First impressions weren't the best.

Set in a bush setting, all we could see were old vans and cabins belonging to permanent residents in the park. We went in and found the permanent residents were kept in one area, and for travellers like us, we had a large open area across the creek all to ourselves. 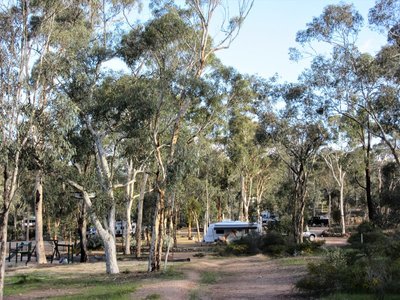 This was wonderful! Plenty of powered and unpowered sites and we could choose for ourselves. Many were drive- through, just what we wanted! A level site, plenty of shade trees, our own fireplace, we couldn't ask for more!
Once we had settled in, I went and checked out the large dam with ducks, then the children's playground and bbqs. All was good!
Later I used the Amenities block which had good size showers and plenty of hot water. The laundry had washers and dryers and the wash was $4.
If you haven't your own car, the park offers transfers to and from the train station by arrangement. 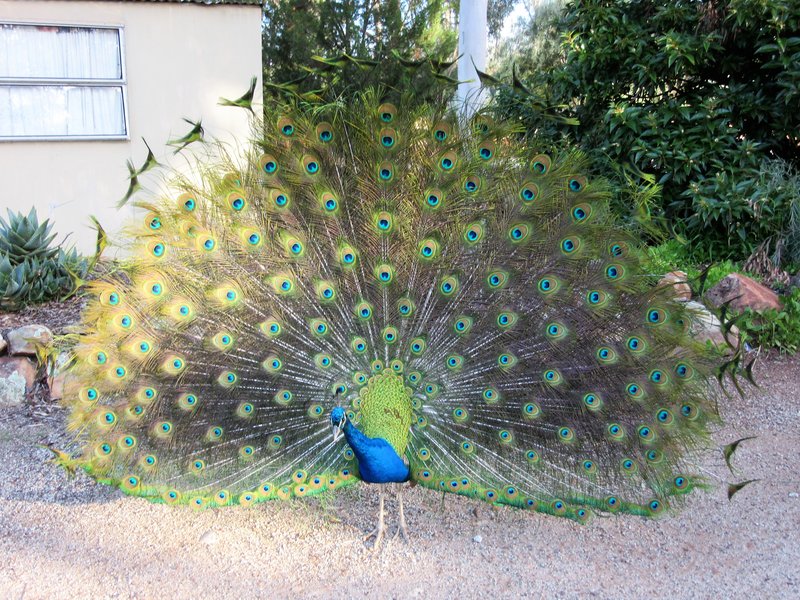 A resident Emu and Peacock, plus many different Parrots flying into the campsites put smiles on many faces! Really great if your from overseas, as the birds are not frightened of humans!

We had a very quiet night and were sad we couldn't stay longer in this park.